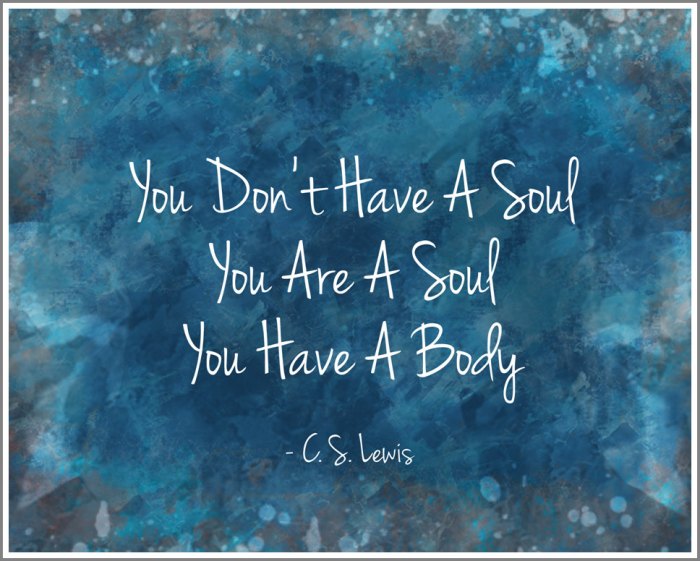 The Internet is great for many things. Accuracy is not one of them. Misinformation abounds in cyberspace. The old adage is true:

“A lie can spread halfway around the world before the truth has time to get its pants on” -Winston Churchhill (or was it Mark Twain or someone else?)

In this vein, one quote often attributed to CS Lewis is in the above image: “You don’t have a soul. You are a soul. You have a body.” No reference. No context. Just a quote. Falsely attributed.

Lewis never said it. Even more, it fails to reflect both Christian orthodoxy and Lewis’s mere Christianity. Here is why.

First, the quotation is Docetic. This predominantly Gnostic doctrine taught that Jesus was not embodied but only appeared to be physical. Docetism reflects Greek philosophy which believed the spiritual world was good and the physical world was bad. Thus in order for Jesus to be perfectly good, He cannot be an embodied being. This type of dualism is contrary to Christianity.

The suggestion that each of us are souls trapped inside of a body reflects this. The Gnostics took such spiritualism and either landed on the extremes of asceticism or moral libertarianism. If we are trapped in our bodies, then we must either be liberated from the physical world (which leads to asceticism) or indulge the flesh (which leads to moral libertarism). Docetism is not the gospel.

Christians affirm both the body and the soul. We are embodied beings and this is good. God made all things – the spiritual and the physical – good. Though the Fall and its introduction of sin distorts God’s good creation, the physical and spiritual world remain good (but easily abused and used for evil). Therefore, sex, for example, remains good even though it is too-often distorted. Food is good even though it is too-often abused. We do not bifurcate the physical and the spiritual.

Furthermore, we shall one day be raised bodily. We will not be spiritual cupids floating on clouds, but embodied beings dwelling with an embodied Christ forever. So no, we are not souls trapped in a body. We are both body and soul.

Secondly, Lewis never portrayed the world as exclusively spiritual. In The Great Divorce, Lewis describes heaven’s gate in such a way as to suggest that the future world is more real than our present one. Likewise, there is no evidence in any of his other writings that reflects this worldview. Throughout Narnia Aslan is physical with a mane that can be touched. Ransom experiences physical worlds in Perelandra, Earth (the Silent Planet), and Malacandra.

Thirdly, in Mere Christianity, Lewis himself seemed to have repudiated this Gnostic doctrine. He wrote:

There is no good trying to be more spiritual than God. God never meant man to be a purely spiritual creature. That is why He uses material things like bread and wine to put the new life into us. We may think this is rather crude and unspiritual. God does not: He invented eating. He likes matter. He invented it.

This is not the language of a Docetic, but of a Christian – a mere Christian.

Finally, the origin of the quote has been discovered. The full quote is “You don’t have a soul, Doctor. You are a soul. You have a body, temporarily.” It was written by Walter M. Miller, Jr. in his 1960 novel A Canticle for Leibowitz. Miller was anything but orthodox.[1]

What should concern us most is how pervasive this quote (regardless of who it is attribute to) continues to spread among people who should know better. I am rarely surprised by what I find on Tumblr, Facebook, Pinterests, and Twitter, but when leading Christians promote it a red flag should be raised. Hannah Peckham chronicles that both John Piper has tweeted the quote and Ravi Zacharias has included it in at least one of his books and tweeted it.

This should alarm us. Such leaders ought to know better. On the surface, this quote sounds good and right but is dangerous. It leaves out the ultimate victory of Christ. He defeats death, decay, disease, pain, suffering, and violence. It repudiates the whole gospel and thus it ought to be repudiated by gospel people.

[1] The origin of the quote really predates Miller. For more see both the Mere Orthodoxy and First Things articles.

View all posts by mcdanell99